Sojourns into Teaching, Reading, and Traveling

Where Are They Now?

It was quite a scene inside the Notre Dame Cathedral.  Artisans carved stones, men sawed wood, workers lifted beams up with pulleys, others stoked the for for iron work, and the horse pulled carts across the workspace.  Out of sight were the artists assembling the stain-glass Windows and beginning the multitude of paintings.  The diorama showed how people worked together to build this great landmark; there were centuries of these men.  As a twenty-first century visitor snapping pictures of it on my iPhone, I wondered, where are they now? 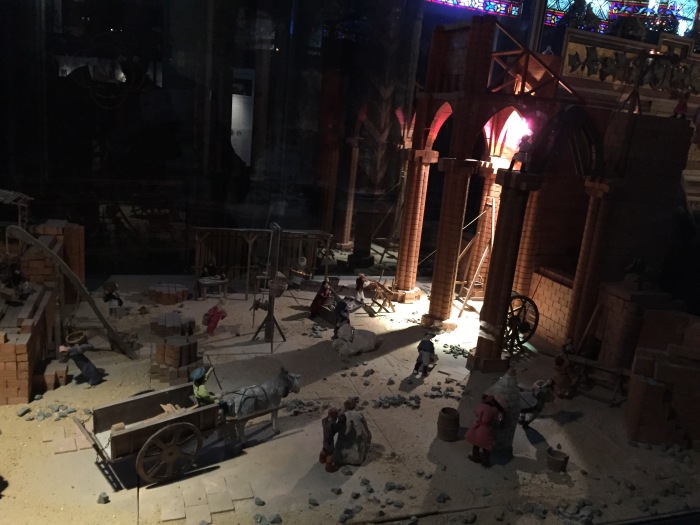 The men who helped build Notre Dame are long buried along with the world that needed skilled artisans. Today’s world has little need of men who wield tools and know their craft to create things of beauty.  Much of anything now can be pre-fabricated and made with machines.  Yes, we need people who know how to fix machines and build houses, but what do we have for our artisans? What roles do we have in our society that fosters this creativity and hands-on knowledge?  Paris abounds with work from another time, but where did their descendants go? What legacy did they receive beyond a big, beautiful, buttressed cathedral?

Some things never change. Montmartre, for instance.  It’s always been a home to the bohemian set and rough around the edges.  The first shots between the Communards and the Versailles government were fired there in 1871 after the debacle of the Franco-Prussian War.  Escaping Baron Haussmann’s  demolition and redesign, it holds on to its old world Parisian charm of quaint buildings; some of its inhabitants make one hold on to her purse. Tightly.

On top of the Montmarte Butte sits Sacre-Couer, the stark and majestic cathedral that overlooks the city: the church of the clouds. Majestic and otherworldly, it provides a sharp contrast to the gothic scrolls and spires of Notre a Dame and St. Chappelle.  It’s power is hidden from sight as you exit the Ligne 2 Anvers station and walk the narrow cobblestone streets lined with souvenir shops and falafel places. At the base of the hill young men spread their wares on the ground hoping for a gullible tourist.  The stairs that ascend to the church are littered with Heineken cans, orange juice containers, and drunken reveled playing loud music.  Beneath them lies the Paris skyline– pinkish gray in the setting sun; above them, behind heavy wooden doors, a haven of calm. 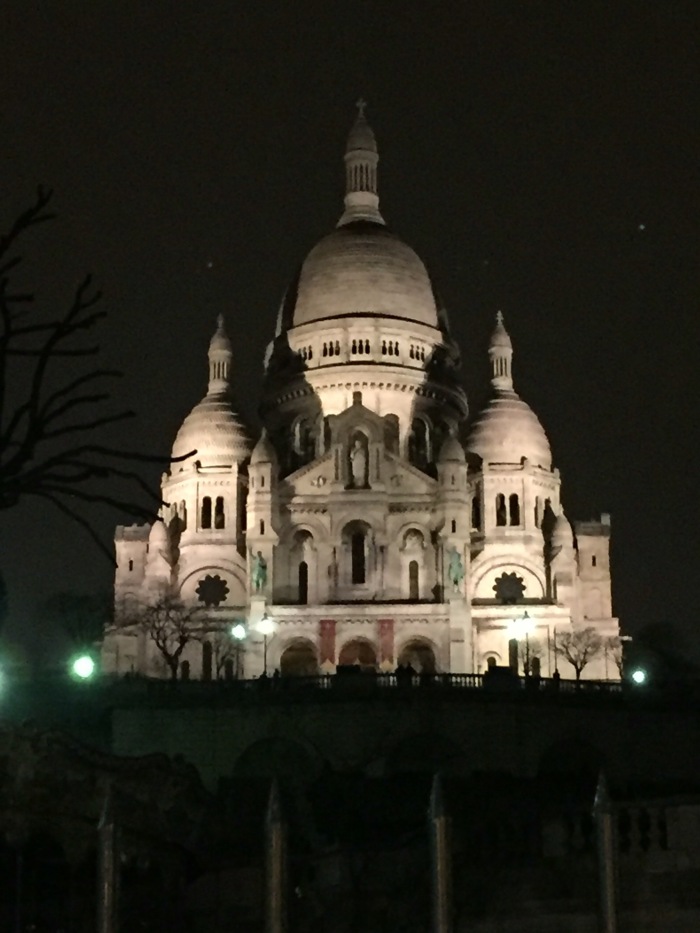 The priest intoned his service and prayer as nuns sang behind him.  The congregation made up of visitors and locals peppered the pews. Visitors walked quietly around absorbing the understated beauty.  Unlike most European cathedrals, the colors and decorations were muted.  The mosaics represented biblical figures as common men– people like you and me.  These scenes inspired comfort and compassion; the God that ruled here was a compassionate and forgiving one who realized our humanity.  He did not inspire fear, damnation, and guilt. Everything prompted reflection and care– from the careful placing of the tiles in the mosaics to walls of blank stone.  It allowed space for one’s own thoughts, a space to process the narrative of guidance, support, and becoming better people; how can we make the world a better place?

These thoughts weighed on my mind as we walked back into the night.